As we could all imagine, the whole world, with some few exceptions, has completely shutdown itself. And with it also all sport. UEFA, the Union of European Football Associations, has decided to postpone the running of the European Football Championships from 11 June to 11 July 2021.

UEFA EURO 2020 was scheduled to take place in 12 cities across Europe from 12 June to 12 July 2020. The proposed new dates are 11 June to 11 July 2021. UEFA would like to reassure existing ticket buyers and hospitality clients that if they cannot attend the tournament in 2021, the face value of their tickets and packages will be refunded in full. Within the next month, further information on the refund process will be communicated to existing ticket buyers via email and on euro2020.com/tickets.

On the other hand, but perhaps only for a short time, the IOC, the International Olympic Committee, is still missing 4 months after their development, it confirmed the development of the next Olympic Games scheduled in Tokyo in Japan and has not yet made an official decision regarding their cancellation or delay.

This is the official communication by CIO about Olympic Games 2020

The IOC remains fully committed to the Olympic Games Tokyo 2020, and with more than four months to go before the Games there is no need for any drastic decisions at this stage; and any speculation at this moment would be counter-productive.

For the moment CMAS, World Underwater Federation, has not yet made a decision on the development of the international events that will take place between now and the end of the year.

Fipsas, Italian Underwater Federation, has decided to cancel all national and international federal events. The CMAS World Cup Round 2 in Lignano Sabbiadoro has beenpostponed to May (but, IMHO, given the pandemic trend, it will be very difficult that they will be held).

Also FFESSM, French Underwater Federation, announced the cancellation of the CMAS World Cup Round 3 in Aix en Provence, without giving an alternative date.

This is the CMAS Finswimming Calendar, updated with the current cancellations 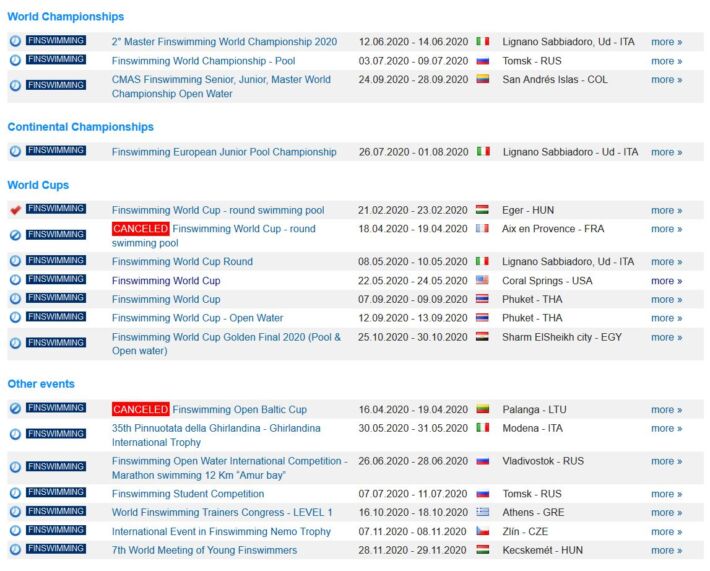 We know CMAS will decide soon. Let’s hope this problem will end as soon as possible.

Previous Article 👌 How to keep up with finswimming trainings during COVID-19
Next Article 💪🏻 Workout at home, save the World – Finswimmers Together [TO SHARE]