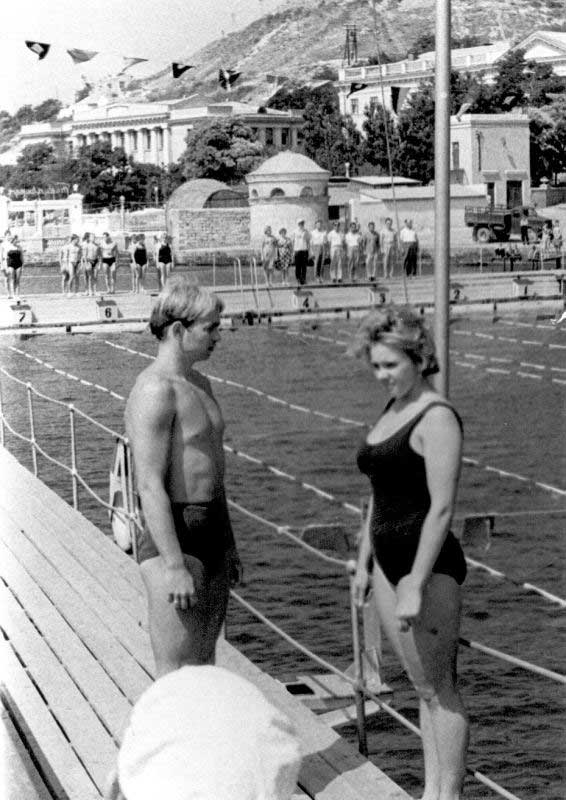 In 1966 of modular Soviet Union on underwater sports has arrived in capital of France for participation in unusual to those years, but rather representative international competitions.
The program of these competitions was unusual. The sportsmen should at first start on water pathes of the first class swimming pool of National institute of sports of France on a distance in one sea mile (1852 м), and then in long distance in fins on the river Marna. Thus the women should float on the river of three miles (5556 м), and men – five miles (9260 м). The winner in finswimming on one mile became the owner of a prestigious prize ” a Light-blue tape of Paris “. And winner in marathon – prize ” Five miles in Marna “. In competitions have taken part national teams of the USSR, France, Italy, Belgium, Germany, England, Holland, Switzerland, Luxembourg.
In that time ours sportsmen competed not in pools, and it is exclusively on open water areas of reservoirs: the sea, lakes, rivers. And the main criterion of skill of the sportsmen, pledge of successful performance was not the speed in swimming, skill to be floating under water by a correct rate, precisely to execute the competitive task. Thus time of performance of exercise, differently speed of the underwater swimmer, on the first championships of the country was not taken into account at all. High-speed the kinds of underwater sports at us should find ” the rights of citizenship “.
November 3, 1966 the member of a modular team USSR kievite Georgiy Uspenskiy has floated in the Parisian pool sea mile in fins fastly and shown result 22 min.04 s. And this time was registered by CMAS as a first in a history of underwater sports a world record among the men. The next day the sportsmen have started on the river Marna. Weather in Paris was extremely cold. Temperature of the water has appeared about 8 degrees. It was necessary to be floating in hydrocostumes. However snowy was very much complicated orientation on coastal marks. Finish should be after the eighth bridge, it remembered firmly, but where what bridge? For our guys all of them seem identical. And has missed Georgiy of finish, though was in the lead on all distance, has lost only 1,5 seconds.
Georgiy Uspenskiy was born in Kiev of March 19, 1940. After war lived in a silent and very green street, at the centre of huge city. But up to Dniepers by a hand to submit. Especially if to run away to gray-haired Slavutich (Dnieper) by familiar roads. And up to unique those years years in Kiev of a winter swimming pool too was absolutely near.
Studied at school. In the summer, as well as all boys lived in Kiev, whole days vanished on Dnieper. In the winter is direct from school hastened in pool, in swimming section. Trained at Vladimir Grebelnik, known swimmer of those years, champion and recordsman of Ukraine in swimming breakstroke. However itself prefered free style.
From the very beginning sports destiny was favourable for hardworking and persevering boy. There was he the champion of Ukraine among children on distances 100, 200, 400 meters by free style. Also has become the champion of Ukraine on 100 m. Not bad played and in water polo. The love to sports has defined also choice a proffesion. After leaving school Georgiy Uspenskiy acts in the Kiev state institute of physical culture.
In the summer of 1959 Georgiy decides seriously to engage in underwater sports. The heavy everyday lives of sports have begun. It was necessary to train persistently, you see it was necessary for short term to master a mask, fins, snorkel and the heaviest – aqualung. Result – victory on a Championship of Ukraine on a distance of 500 metersin fins. The next year – victory on a Championship of the USSR. Further victory in 1963 on the international competitions in GDR and, as a consequence, registration in a basis of a modular team USSR. In one year – victory on the largest international competitions in Italy, on lake Lago-Major. These competitions were considered as an informal championship of continent. In 1965 – again victory on the international competitions in Alushta. Further – first place in Austria and success in Paris. One year after program in capital of France considerably has extended. Now sportsmen – which have arrived there, challenged superiority and in high-speed diving in length, and in finswimming, and on average distances. Uspenskiy was 27 years. For high-speed swimming the age is obvious superfluous. But Georgiy confidently wins 100m, and by swimming away on 200 м, and not simply wins, but also establishes thus new world records.
In 1971 Georgiy Uspenskiy – one of the founders of sports club SSCY(nowadays “Darnitsa”) , which main trainer also becomes. Began a new, not less interesting stage of the life of Georgiy Uspenskiy. All diligence and the love to sports Georgiy Uspenskiy embodies in the schoolboys. As well as any trainer, Uspenskiy also the thin psychologist. Understanding of each sportsman, skill to find those words which can force him to train – here that distinguishes Georgiy Uspenskiy from the majority of other trainers. In each sportsman he sees only champion and confidently conducts him to maximum. ” There is only first place ” – here words of the trainer, which conduct him to the purpose during all life. The fidelity to favourite business, is possible somewhere even fanaticism and the fantastic serviceability can force to not admire by such man. ” We have no holidays. When others have a rest, we shall train and to improve the results.”

For thirty years of trainer’s activity Georgiy Uspenskiy has brought up twenty three recordsmen of the world, about sixty Foremen of Sports of the International Class. Not by exception of steel and daughters of Geortgiy – repeated champions of Europe and World, Svetlana and Yulia.

Many Thanks to Maksim Moroz for the nice article!