Interview with the coach of the Czech Junior Finswimming Team Vladimír Beneš, about this year’s season, motivation and vision for the future. 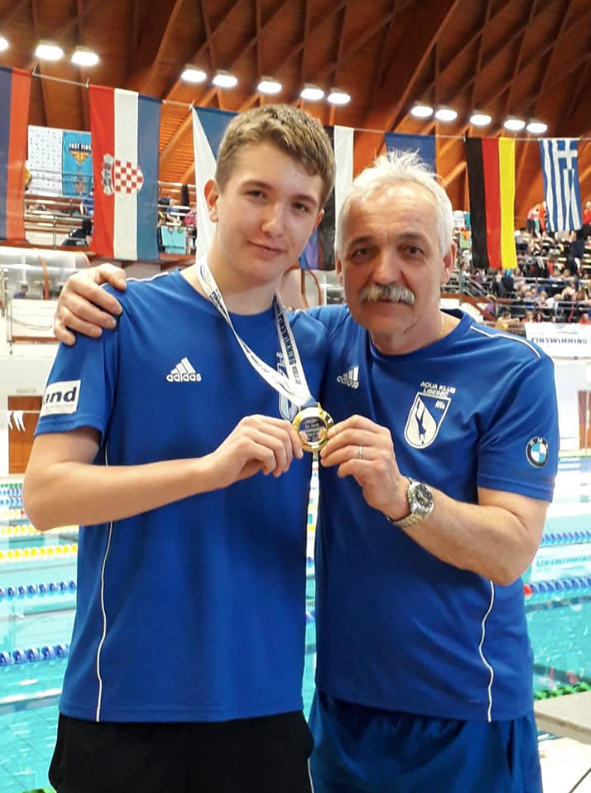 At first, I would like to greet all supporters of our sport and wish them the most important in current time – good health.

I actually didn’t need to stay in quarantine, however the quick onset of governmental actions surprised me. Both at sport and at work, as I’m not only coach, but also teacher. At first, I have been preparing various training opportunities, but the actions have been stronger and stronger.

I work as a coach for the oldest group at Aqua Klub. We have our Facebook group on messenger, which is being active for many years. Thanks to this group I have been sending various forms of exercise and running trainings to everyone. The situation got better after the first release of the actions and due to this we could start with dryland trainings. Bike trips, circuit trainings at the outdoor gyms and running trainings around the Liberec dam – where Jakub Němeček helps me a lot. As for younger athletes, I can’t specify the reason why it was not possible to train in these groups. Apparently the reasons was fear of parents and the heavy burden of home schooling.

Yes, you are right. At the beginning of this year I have extended my contract at the Czech Junior Team for three years. Unfortunately, the situation became more complicated after the outbreak of the pandemic. We have held the first training camp in January for the wider selection of the athletes. The second training camp was supposed to be held during Easter holiday, which resulted in last minute cancellation. My feelings in the position don’t  change, it is my fifth year and its fantastic.

At this time, the peak of the season for the juniors is unknown. We are still waiting for the date of the European Championship, as everything is being postponed now, if it will even take place. I would definitely be glad if the championship would take place – mainly due to the oldest junior athletes, who would jump to the senior team without awaited peak. Currently the wider selection of the athletes contains 26 finswimmers. They are athletes who are already experienced on the international scene, but also talents for the upcoming years to come.

Currently for the European Championship, there are three boys who reached the limit – Matyáš Kubíček, Tomáš Pilný a Matěj Novotný. As for girls, there is one girl who reached it – Kateřina Padalíková. It will be very difficult to find another opportunities. Several finswimmers have only a short limit to the limit. At the moment I have the idea who to add to the team for the European Championship, but it will depend on the fact whether the championship will even take place.

Definitely. If the pools will be open, preparation for the best performance shouldn’t be a problem. As the finswimmers miss water trainings for more than 2 months, it will definitely take some time. If the pools are open till the end of May, the championship would need to be postponed for the end of the school summer holiday (August). I do hope we won’t start from scratch that athletes did not lose everything. Those three months should be enough for preparation.

I don’t know how high do you mean. Since the time I have been with the team, I got used to both medals and titles. I am a bit ambitious coach and this will always be my goal.

Of course the preparation at the home clubs is the key for success. I really like to work with personal coaches of the athletes in the Czech team, I consult with them all of the preparation, but also the health condition together with mental health. Not all of them are having the same training conditions, but not even the moral attitude. Thanks to training camps we can always catch up. The team unites and athletes wish each other the best.

We will probably see later. Some athletes maybe underestimated the dryland training and didn’t devote enough time for it like other did. Individual training is mentally demanding, I experienced it myself at a certain time. After all, it is definitely easier to train in a team. However who wants to be successful – must train more. That means also alone.

The next period is in two years’ time. At the junior team it is a matter of generation exchange. The oldest group goes into senior category. After them, the success is taken by the younger ones.  I don’t like to say goodbye to those who leave every year, but I always say we have enough talents to replace them. And so far, so good.

Many thanks for the interview Mr. Beneš, we wish you a lots of luck and success in the upcoming time!

Thank you for the opportunity.