Here for you another Great Finswimming champion, William Baldwin, interviewed in 2013.

Briefly explain your sports career, since the beginning until the European Winning. How did you discover Finswimming?

Well I started swimming at age 14. I discovered Finswimming completely by chance. I wanted at first to enroll in the water polo team but a friend suggested we try Finswimming instead. For the first month I thought the sport only used the bi-fins, but then I saw some older kids swimming with the monofin and fell in love with it. In 2009, after 3 years, I got into the junior national team and received a silver and bronze in 200 and 100sf. A year later, at age 17, I made the men’s national team and was able to get the silver medal in 100sf after the champion, Kabanov. The next year, I feel, was the worst in my swimming career. In Hungary I attempted to get the world record in 100sf but was disqualified in the semi-finals for an early start. Finally in 2012 I was able to get the world record in 200 and be the first to swim under 1:21:00. That summer, I broke the record in 100sf twice, the second time being at the European championship, and received the gold medal with a time of 34:18. Now I am the current world record holder of the 100sf.

Who are your favorite Finswimmers and why? Who is/was your point of reference?

Well, ever since I started I admired, most of all, the Tsourounakis brothers. I am proud to be able to swim with an athlete and friend like Antonis Tsourounakis. Also I admire Kabanov and Kanyo for being rocketmen and very good sportsmen. They both have been good friends to me.

I love the speed and I love that it is not a conventional sport. It never gets tiring but keeps getting better. I dislike that it is not well known enough, such an amazing sport should be advertised more and hopefully one day be in the Olympics. 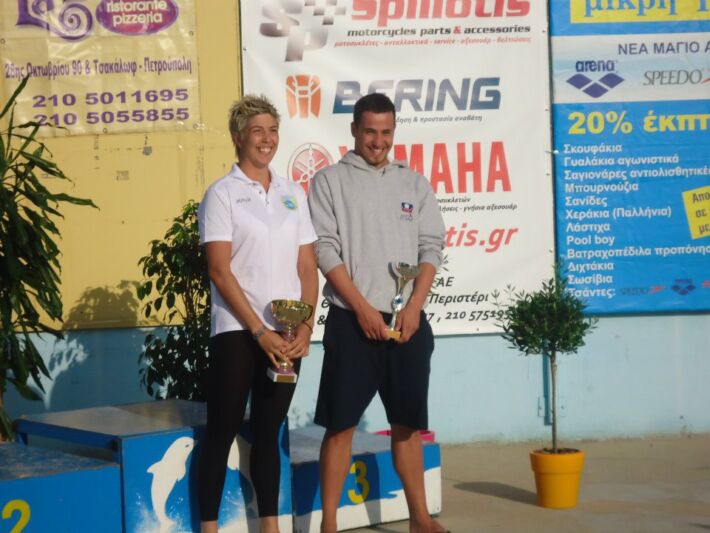 What do you like about Finswimming? And what do you hate?

I love the speed and I love that it is not a conventional sport. It never gets tiring but keeps getting better. I dislike that it is not well known enough, such an amazing sport should be advertised more and hopefully one day be in the Olympics.

Sport & youngs, what would you say to a little boy/girl that is starting Finswimming?

Well it depends on what he is interested in, if he wants to become a champion he will have to work very hard, to the point where he cant move his body anymore, cry, yell and fight with his coach. It might sound scary but in the end it will all be worth it. You will get what you work for. If he wants to do it as a hobby then I am happy he chose such an interesting sport. He will have a lot of fun doing it and being part of the Finswimming family.

Does the Greek Finswimming Federation help you? How?

No the Greek Finswimming Federation doesn’t help, because it can’t. The federation has no money and is barely able to keep pools open. If things were better it could help pay for a new fin but right now all I can ask for is a pool to swim in.

If you could do something, what would you do to let Finswimming grow?

I have a dream to bring Finswimming to America. I am half American and I believe that once the sport is know there then it can grow more. America and Canada for me are the missing links to why Finswimming isn’t as popular as it deserves to be. And of course, more advertising for the sport here in Greece, but unfortunately no major channels know about the sport or aren’t interested enough to look into it.

What are your sport targets for the future?

I am studying Theology in Athens. I find it very interesting and Christianity has changed my life and for this reason, I want to take the time to study and dig deeper into my beliefs. After, I hope to possibly study something to do with sports or public relations. 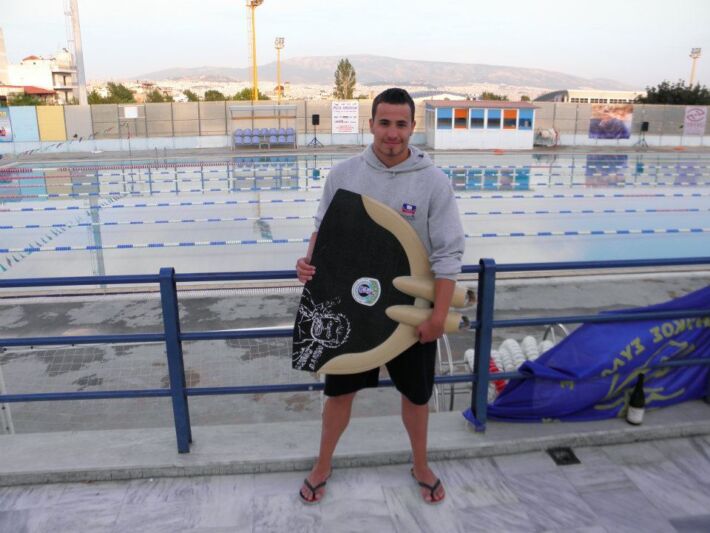 I enjoy drawing anime a lot. I am actually working on my own story with my own characters. Unfortunately I don’t have time for many other hobbies.

Tell us something (free topic)

I would like to encourage people to put work into their relationships, and to appreciate the people in their life. I can’t stress enough how much having my family, my coach (George Myrilo who is like an older brother to me) and my friends, has helped me get where I am today. These people turned me from a child into a man. I can only wish for every reader that they have the privilege to experience the same kind of love and support I received. Finally to turn to God for their problems, because so many times in my life I have seen Him work and help me. He was there for me even when other people failed me and I wanted to share that with everyone that I know. Thank you for the interview and your interest in me.