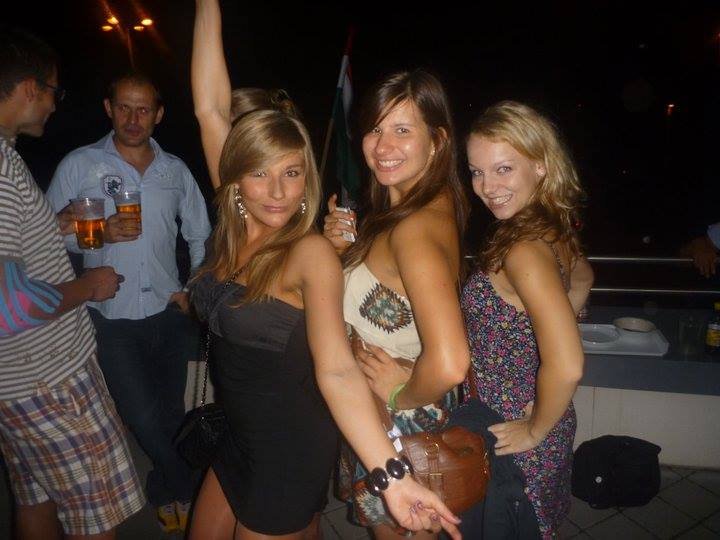 1) Hello Zuzana and Kasia! How did you discover Finswimming? Tell us your sport career.

[KAT] Hi everyone. When I was 10 years old, I started classical swimming, because I had problems with my spine. I was a breaststroke swimmer for 2 years. My coach was a good friend of Rustem Bodurov who showed us some monofins. I wanted to try swimming in this.. and it was better, cooler, faster than classical swimming and I was good at it. At my first competition in Finswimming in Valence in France in 2002 I won my first medals. I was training twice a day in Toruń (my home city). I was multimedalist of the Polish Championships and finally in 2005 (15 years old) I was at the Junior World Champs – 2 bronze medals on 400sf and 800sf . As a junior I was competing in the Senior Champs (Torino 2006, Bari 2007) and I was in the finals. When I was 18 years old I moved to Gdańsk to study. I train here alone, without a coach, without anyone, only me in the swimming pool.. I can’t call it “training”. For 5 years my national coach has been sending me what I should swim by e-mail.. believe me, it’s really really hard to do everything if nobody controls me and it’s only my will whether I enter in the swimming pool or not. Now I’m still a medalist at Polish competitions and a Polish records holder, but abroad it’s not so easy. I train before Champs only 5-6 weeks with the coach at swimming camps.. hmmmbut  it’s not enough..

[ZU] I discovered the Finswimming thanks to my dad, who did this sport more than 20 years ago. He was specialized in long distances, and after his own career he become the coach of the Club, so me and my sister started to finswim too, in the year 2000.

2) We know that you are good friends, tell us how and when did you meet for the first time. How do you manage your rivality?

[KAT] Yes, I know Zuzka for looong time, but I think the first time when we were talking more than “hi ! hi ! how are you?” was at the Senior European Champs in Eger 2008 at the banquet party. Privately we are good friends but in the water we are rivals, I think it’s a healthy rivalry.

[ZU] I remember “Krotka” since junior category, but she used to win his the competitions, she was much more better then me, so we didn’t speak to much. The first time I remember we spoke was in the after party in 2008 – after European Championship in Eger (Hungary). I don’t feel any rivality now. Now we do the same races, we use to swim almost the same time in all the events. Anytime we don’t know who will be the winner, but I don’t care, I am happy also for her if she does good results. I just feel a little “union” with her and with the other girls to beat for example the ones from Russia and Ukraine.  It’s like them and the rest of World 😉 it’s still impossible!

3) What do you do in your life? (studies/work/free time)

[KAT] I study Physiotherapy at the Academy of Sport Education in Gdańsk, I’m on the final year. I’m writting a Master Thesis about different posture defects of children who finswim and not swim at all. I live in a dormitory – there is always something going on. I don’t work because I have athletic and scientific scholarship – enough money for me. In free time.. sport ! Fitness, jogging, spinning – I love this. I’m a fitness instuctor by the way. On the other hand I spend a lot of time with my boyfriend, I like going out with him and my friends. I like travelling – I can’t stay in one place for longer time, my mom calls me and asks: “where are you ?! when are you going to come back home to your mammy?! :P” (I’m an only child)

[ZU] In September ’12 I finished the bachelor degree at University of Physical Education in Olomouc, and now I’m still continuing with studying in the same University, just a little bit different specialization. So now I am in the first form of Application physical activities, it’s like to know which movement is useful for the people with disabilities, handicap or senior.  In October ’13 I would like to go to Italy to do some type of stage to work with this people.  And for sure to continue the cooperation with my “Italian” trainer Andrea Mangherini 😉

4) How is the Finswimming situation in Czeck Republic (for Zu) and in Poland (for Kasia)? (how many teams/people/etc etc)

[KAT] In Poland, finswimming is not so popular. I often hear: “oooh you train finswimming.. hmm but what’s this?”. There are 13 clubs and more or less 250 competitors. There are not many seniors because a lot of people stop finswimming when they start studies. You must pay for everything by yourself, for every competition, every World Cup, so it’s only a hobby. In better situation are those who are in the national team – you can see on the Champs, how many people are in Polish National Team.

[ZU] The situation is not very good. There are fewer and fewer people who swim. Usually they finish on their secondary school – not many people swim in senior category, so its very difficult for us, especially for the long distance, being all the time alone, and compete with myself it’s not good. I think we have about 15 teams in the Czech Republic who still works, and train regulary.

5) What are your targets for this year in Finswimming?

[KAT] Good start in the World Game in Cali and the World Champs in Kazań. I’m preparing also to be in the army and train naval pentathlon like Mateusz. I think it’s the best way to combine work and sport in the future.

[ZU] My targets for this year are just “done”. I really wanted to be nominated to the World Games in Columbia, because the last one in Taiwan was very big experience for me. And then the World Championship. I would like to compete good, maybe to try to do some of my personal bests. To be in the final in swimming pool, and in the long distance maybe to try to have also some podium…we will see.

[KAT] It’s hard to make it more popular in Poland, the Ministry cuts fundings on non-Olimpic sports, it was very hard for Polish Federation to find money to buy ticket to Cali. We are building new swimming-pools, we organize a lot of competitions, sometimes there is local television at them or live transmissions in the Internet, they are looking for sponsors but it’s really hard.. Moreover I think if there was a better reward at the Final of World Cup, more people would come and compete. Haha everything revolves around money.

[ZU] I would like to change many things. It seems that things which happens, are just “hurting” our sports. We have just to pay, pay and again pay, we have very bad new rules which really doesn’t help us  – and because of these things, Finswimming could not be more visible! But nobody will do this small sport if it’s so expensive…no people, no famous sport… this makes me sad.

7) Tell us one of your usual day. From the morning, until the night.

[KAT] All my days are different, only at swimming camps there is some routine (train-eat-sleep)
Usually I get up, go swimming (or not), go to the University, cook something with my boyfriend, do some fitness, if it’s weekend – go to party

[ZU] Usual day, well so I wake up at 5 because sometimes we train in the morning (I hate it) from 6-7 am, then I go to school, where I try not to sleep, and then sometimes I do the lesson in fitness center, or take some coffee with my friends, and after, very RARELY of course I take some glass of wine also with my friends.

8) Who is your prefered Finswimmer? (who do you admire) and why?

[KAT] Everyone admires someone, I admire Valeria Baranovskaya. We know each other since we were juniors and I think she is a really good finswimmer.

[ZU] The finswimmer I admire…difficult to say, there are many. But maybe it would be Denes Kanyo, because it’s unbelievable the times he is still able to swim, and I remember from my first International Championship in Eger 2004, when I didnt know anybody, but I remeber Stefano Figini swimming, and I loved his style! By the way for sure at the beginning it was my dad I admired. I remember  when I was a child that everytime he came home with some medals, cups…I wanted to be so good like him and have also so many medals!

9) Free topic say what you want!

[KAT] Greetings to all finswimmers and readers of Finswimmer Magazine!!! And.. love my mom!

[ZU] I would really like to say big thank you to your web sites for all informations from all places in the World of Finswimming. It’s nice to see that Finswimming exist and we can know some other information.