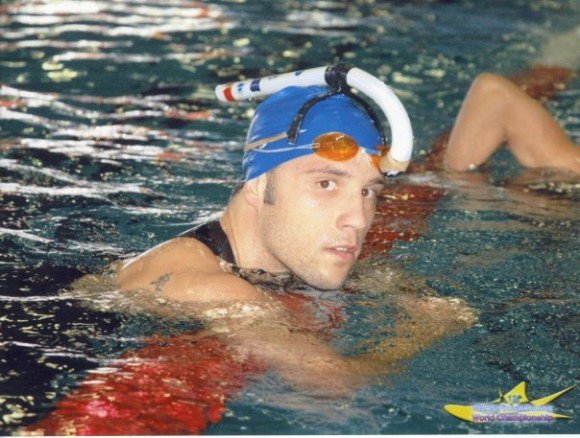 Name:
Riccardo
Surname:
Galli
Gender:
M
Date of Birth:
13/07/1982
Place of Birth:
Milan
Nationalities
Italian
City of Residence:
Barcelona
State of residence:
Spain
Occupation:
Marketing Assistant
Start practice Finswimming (year):
1996
Race start Finswimming (year):
1996
Club
from 1996/1997 Pinnazzurra Opera – Milan 1997/2006 Swim Club – 2007 to now Club Esportiu Mediterrani Barcelona.
You train in 25mt or 50mt Swimming Pool?
I stopped swimming in earnest in 2006. Now I keep in shape both in 25 mts Swimming Pool.
Who is your coach?
Pinnazzura: Marco Legnani
Nuoto Club Milano: Luca Guarnaschelli (finswimming and general coach) and Carlo Vittorio Cannistraci (personal trainer)
Club Esportiu Mediterrani: Ivan Alonso Portela
Favorite race:
100 mts surface without doubts.
Favorite athlete (past or present, also as a reference point):
in this last years there are so many strong athletes that is hard to pick a favorite … general throughout the Italian national team … Figio, Nava, Cesare etc. .. but also Lutzkendorf  (because you have to be superlative to be able to beat Figini) although recently I could not see him swimming, the Chinese Zhou Bao Zen, for the times he does, and more …
In the past only 2: David Landi and Sergei Akhapov (except for the last few years!)
Your best results (summary):
Youth European Champion 1998 50 apnea – Youth World Champion 1999 50 sf – Senior European Champion 2003 100 sh and 4 x 100 – Vice World Champion 2006 100 sf and 4 x 100.
Record national or European / global level (also passed):
World record 50 area youth in 1999: 17.63
Italian record 50 apnea (which survives from 2005!): 14.92
Italian record 100 surface: 36.09, already beaten.
Italian record 4 x 100 relay.
Do you prefere individual events or relays?
Both, but do not exceed 200 meters!
Favorite races in the pool or long distance?
Long distance? Que es eso?
What is your specialty (distance, surface or immersion)?
Speed, 50 and 100. Once …
What type of fin or monofin use?
Binfins, monofin Chinese.
What other sports have practiced before?
Finswimming, Finswimming, Finswimming … and Finswimming. Sometimes long time ago underwater orientation.
Other sports now?
It’s enough if I can go swimming twice a week!
If so what?
Year of entry into the National Team (Senior or juvenile, leave blank if you never entered):
1997, Youth Worlds of Balatonfunzfo, Hungary.
National Team last year (if you’re still leave blank):
2006 mythical senior worlds in Turin, Italy
Do you have a website or that of your team?
Hobbies:
Living the life!
Other comments:

Previous Article 🇭🇺 Champs of the Past: Juhos Gergely
Next Article 🇭🇺 Top of the Finswimmers: Denes Kanio