Today we want to take you down under, to see what is happening in the lovely swimming pool of the Ironside State School, where an old member of Italian finswimming world has been working for some years. From big to small, we are in Australia, Queensland, Brisbane, up to the quiet suburb St Lucia. Here, Stefano Zerbini, one of the few athletes to have been part of the Italian National team in both swimming and finswimming, lives and works.

Hi Stefano, how did you end up in Australia?

Fate had it that my wife Lucia was chosen for a postdoc at the Queensland University in 2017.  After difficult years in Italy, it was the opportunity we  were looking for. At the beginning it took some time to adapt to the unavoidable cultural differences. Now, however, after almost four years, we are completely in love with this lifestyle and the people we met in St Lucia. 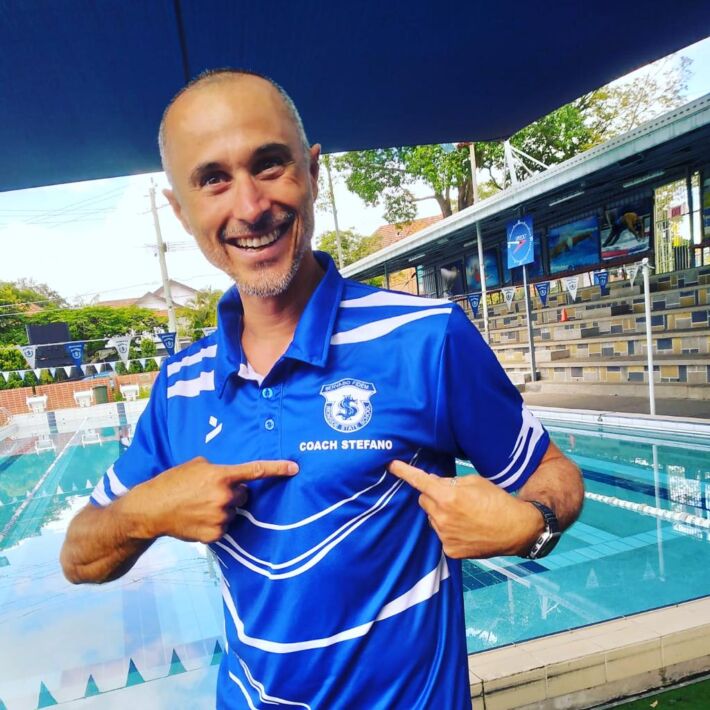 Tell us what you’re doing over there.

Since I’ve moved here, I have been working all the time at Georgie Parkes Swim School. Georgie, an Australian swimming icon, runs the Ironside State School swimming pool in St Lucia. Here, we mainly work with children aged 5 to 12. Our motto is to “lay the foundations for future success” in a friendly and inclusive, though highly professional and efficient environment.
In addition to my coaching job, I also resumed swimming. I train twice a week at the UQ Aquatic Center with a group of unleashed masters. Unexpectedly in 2019 I broke the Australian record of 100 butterfly. A few months later, during a swimming masters meet at UQ, I unofficially smashed the masters world record in the 50 bifins, with the time of 21.49 (in 2019, at age of 44). Then due to injuries and pandemics I could no longer compete with fins. In 2021 I will try again at the Australian Masters Games in Perth, where finswimming is part of the program for the first time ever.

Speaking about finswimming being part of a multi-sport event, tell us about Queensland 2032.

Quoting Ian Hanson  – it could well be a case of “Australians let us all rejoice” when the IOC Members cast their votes on Brisbane’s “irresistible bid” to host the 2032 Summer Olympic and Paralympic Games. So, Queensland 2032 has big chances to become host of Olympic Games. On the other hand, a small thing like finswimming being part of Perth

2021 Masters Games, may result in a small step for the whole sport movement, but a giant leap for finswimming world. Surely, there’s plenty of work to do and situations to be solved before we may say finswimming will be considered as part of the program of Queensland 2032: we have to provide equipment, to collect sportsmen, to share knowledge, to school coaches and obviously to fund-raise the whole venture.

That’s why you put a bifins event during a swim meet? 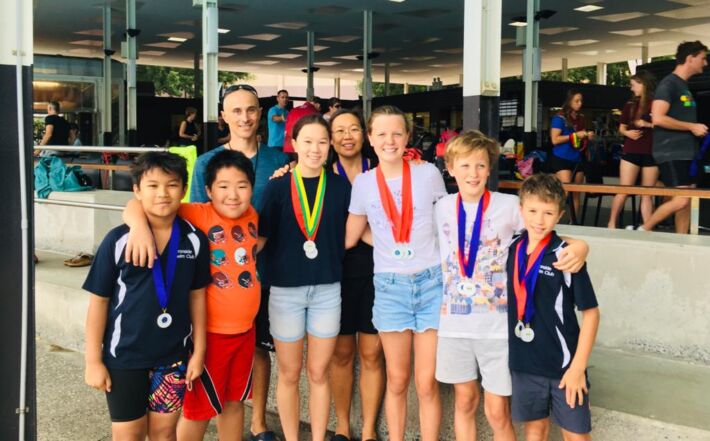 Since the beginning of my Australian adventure, I have tried to introduce this sport even here where it is almost unknown. Georgie was immediately interested in this “exotic” novelty. Elsewhere I have found more distrust. However, thanks to the help of some UQ masters friends, in particular Christina, Martin and Sean, it was decided to make a 50m bifins show case during our meet. No particular rules and even start from the water.

By the way, talking about that meet, we have seen that you have organized it. How did it go?

More than 50 competitors enrolled for this Ironside SC Finswimming Preparation Meet held 12th June 2021. By relieving the participants from the strict international rules in terms of approved gear and mandatory snorkel, we involved many children and their parents from our swimming school. It was a nice afternoon with the grandparents in the stands or volunteering as timekeepers. There was also the barbecue that kept everyone fed – a must!.

What are your plans for the future of finswimming in Australia?

Last year I collaborated with AUF-OZIFIN – the local finswimming federation – and their president Helen Lane, to organize the National Championships right here in Brisbane.  Then the pandemic and a very busy swimming schedule slowed down our projects.

This year, as said, the finswimming season will have its climax with the Masters Games in October. Before that date, I would also like to organize the Queensland State Championships. Maybe with an Open formula, to include friends from other states.

In Australia, and particularly in southern Queensland, swimming is almost a religion: this means on one side, an obstacle for the introduction of other disciplines, but at the same time it indicates an enormous potential. Here there are swimming pools everywhere, lots of children and adults who train daily with fins and a very high level sports culture. All ingredients that, if well mixed and balanced, can make our sport boom.

For my part, there is a great deal of enthusiasm. AUF-OZFIN supports me widely and the friends around me begin to reap the benefits of this novelty. Such an inclusive new sport, finswimming also has a major social impact on small local communities. The use of fins, both at a competitive and amateur level, can amplify the aquatic sports audience.

You have been an athlete and coach of both disciplines. How was it possible to bring the two sports together?

As an athlete I could enter the Italian national swimming team: about relevant results in my career, I may recall 1:52.81 in 200 freestyle, 2:02.28 in 200 butterfly, both in long course, and 3.56:01 in 400 freestyle in 25m pool, all in 1998. Another geological era, haha.
I approached finswimming only at the end of my career: I should have done it earlier! For instance, I could improve all my short course personal bests when I was already in my 30s. In particular I was able to break the 2 mins wall in the 200 fly for the first time just before Christmas 2005. The main reason was the huge improvement in my underwater kick after getting acquainted with bi-fins.
Swimmers have always been a bit snobbish towards finswimming: maybe there’s a wrong perception about it, due to its status as underwater sport. Unfortunately this was the cultural context in which our coaches raised us. 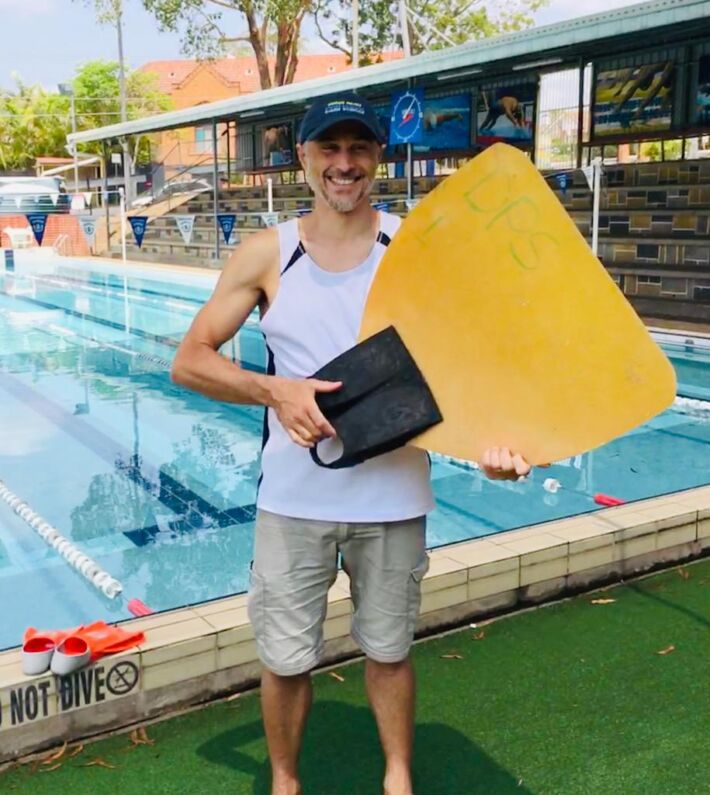 As an adult, without ideological barriers, fins were a great addition to my swimming training. Competing in this  sport was the natural consequence. With great benefits in both disciplines.

As a coach, I avoided dividing the two paths. All my athletes have always trained with and without fins, with and without snorkels, as I think it should be: more synergy with 2 very similar water sports. The monofin, for various reasons, needs dedicated spaces. But this is a “problem” that occurs only when the athletes are more muscularly mature and their technical level requires a greater specialization.

As a masters athlete, I recommend everyone to try. For this age group, fun should be the beacon. Challenging yourself with something different, stimulating and satisfying can do nothing but good.

We mentioned about the Olympics, few lines above. Finswimming has potential to become an Olympic discipline but has never been included in the Games program until now. Why, in your opinion? And what can be done to unblock the situation?

This is a complex and recurring issue on which many words have been spent. My impression is that there is a tendency to associate finswimming with the world of underwater activities and fishing, rather than seeing its proximity to more traditional water sports. The fact that it is mistakenly associated with recreational activities rather than competitive sports may have put a stop to the process of Olympic inclusion.
I believe that there are political balances, which I do not know, which have so far prevented this fascinating sport from emerging worldwide. It is emblematic that in the homelands of swimming, USA and Australia, it is almost unknown.
In my opinion, finswimming, with its variations of swimming pool speed competitions, open water long distance races, team sports and, lately, of mermaiding, can autonomously represent a model of inclusion, spectacular showcase and respect for the natural heritage like few other sports.
Being part of the OZFIN board I hope to be able to bring greater visibility to our sport and help give it the international prominence it deserves.

Thanks Stefano, good luck with all your plans!