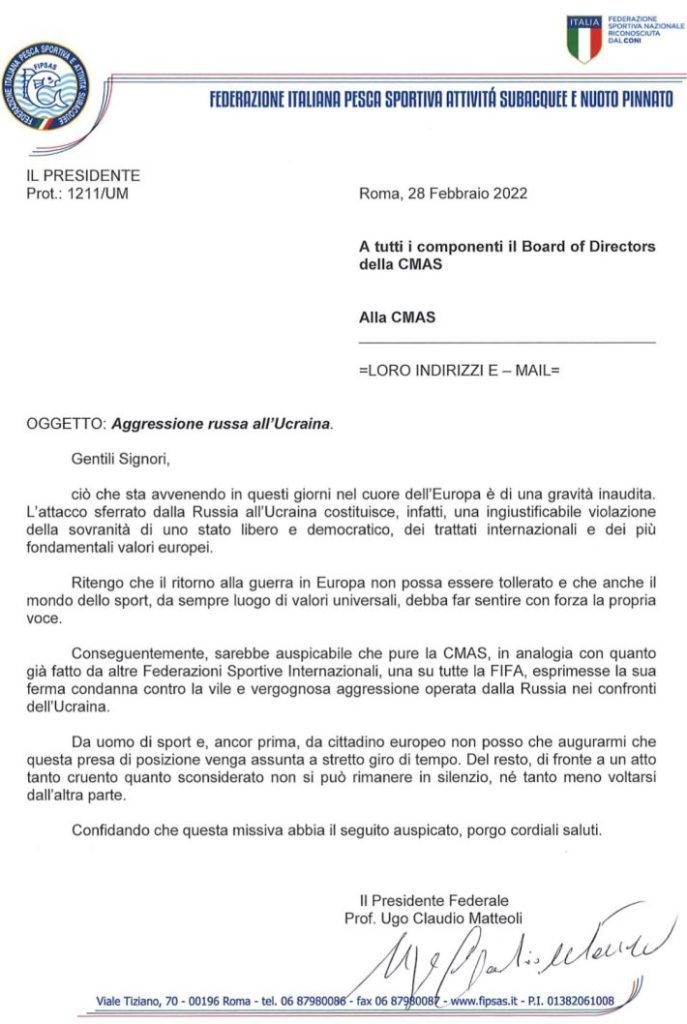 The Italian Underwater Federation, FIPSAS, asks CMAS to have a position about Russia making the war in Ukraine, killing thousands of people including women and children.

This is what Mr. Matteoli says:

Dismayed by the dramatic news coming from the heart of Europe, the FIPSAS President, Prof. Ugo Claudio Matteoli, officially asked the CMAS (World Confederation of Underwater Activities), through a special note, to express his firm condemnation against the vile and shameful aggression by Russia against Ukraine. “After all – President Matteoli specified – we cannot remain silent in the face of what is happening, of the atrocious suffering of a people from which freedom and democracy are being wrested with the violence of weapons and the threat of death. It is a duty – added President Matteoli – that the world of sport, which has always been a place of universal values, should strongly make its voice heard ”.

Here we have translated the letter from FIPSAS to CMAS.

Ladies and Gentlemen, what is happening these days in the heart of Europe is of unprecedented gravity. The attack launched by Russia on Ukraine constitutes, in fact, an unjustifiable violation of the sovereignty of a free and democratic state, of international treaties and of the most fundamental European values.

I believe that the return to war in Europe cannot be tolerated and that the world of sport, which has always been a place of universal values, must also make its voice heard.

Consequently, it would be desirable that the CMAS, in analogy with what has already been done by other International Sports Federations, one above all FIFA, would express its firm condemnation against the cowardly and shameful aggression carried out by Russia against Ukraine.

As a sportsman and, even before that, as a European citizen, I can only hope that this stance will be taken soon. After all, faced with an act as bloody as it is reckless, one cannot remain silent, much less turn away. Trusting that this letter will have the desired follow-up, I offer cordial greetings.