Today we want to share an old interview with famous finswimmer from Poland – Mateusz Szurmiej.

Hi Mateusz, tell us about your career since the beginnings, how did you discover finswimming?

hello. my adventure of finswimming started when I was 12 years old. I discovered this sport by chance. I went to the pool to learn to swim and then I saw people swimming with the monofin. I knew at once that this is it what I want to do in my life.
Three years later I got the qualification for the national team. I went to my first World Junior Championships where I won my first medal.

What do you do in your life? (studies/work/hobby) How looks your usual day?

On a daily basis I’m a little busy. I’m studying at a sports academy, I have my own business, I’m in the army, where train naval pentathlon and have to find time for a finswimming. My every day is different and I don’t have too much free time, but I like it

You are in the army and train naval pentathlon, tell us about is, how do you connect training two disciplines?

It isn’t difficult to connect these two things because one of the pentathlon event is swimming with fins we also have a lot of running ( i don’t like this) , so I have a good general preparation.
The most difficult to when I have two championships almost at the same time. It was for example in 2012 where two days after the World Championships in pentathlon we had our championships in Hungary. It was very hard for me, especially as competition in the pentathlon was in Brazil in a different time zone and two days later I had the first start in finswimming.

You will take part in World Games in Cali, what are your targets for this year and future in finswimming?

I don’t like to talk about my targets. I would like to start at the next competition, so that I’ll satisfied with myself. 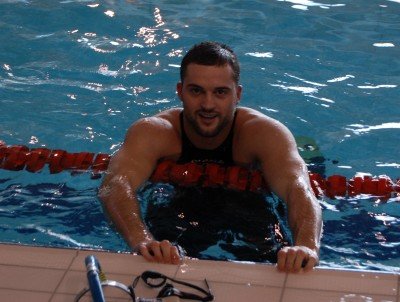 You started finswimming when you where a boy, what will you tell to young boy who has just started training, who wants to be strong like you?

if they want to achieve success in life, they must work hard. Don’t give up after failures set targets and try to catch them

What will you change in finswimming to make it more popular in Poland and in the World?

I think it a good idea to make our sport a more popular would be try to add finswimming to the International Military Sports Council (CISM) – is one of the largest multidisciplinary organisations in the world. They organise various sporting events for the armed forces of their 133 member countries. Then many people could continue their sports career longer. In Poland, the problem of our sport is that you don’t have any money for it. a lot of good athletes ending adventure with sports, because they have to go to work and have no time for training. if finswimming would a sport military people could get money from the army.

Who is your favorite finswimmer and why?

I admire Denes Kanyo. He proves that you can be a great athlete at a very high level for a long time.

Your biggest success and the biggest defeat ?

I hope that the biggest success are still ahead of me
The greatest success so far in my career was when I was a junior in 2002. then won a silver medal at the World Championships in Patras in 200 sf. at the same competition broke the world junior record for the 400im

Who supports and motivate you the most ?
I really love competition and traveling and finswimming gives me this. It motivates me to train.

I think a lot of girls are wondering what is your ideal of woman?
I can give only one correct answer to this question and to stay alive – my wife